Ride #3 of my 50-in-50 memorable rides is in the books.  It was also my first race event of 2016.  King Street Cycles 2nd Annual Sugar Shack Hustle, Fat Bike Scramble was held on January 31 at Shady Grove Maple Farm outside of Guelph.  I didn’t enter this event last year because I didn’t get my fat bike until last summer, but it’s been on my radar ever since I got my Surly.  In fact, I was so keen to enter this year, I got to wear raceplate #01 because I was the first to register back in December. 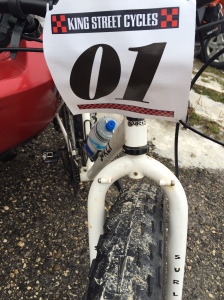 The organizers capped the registration at 75 riders and the event sold out a few weeks ago (last year’s event capacity was 50 riders).

After preriding the 3km course last week, I had anticipated a slow, snowy course with a few inches of snow covering ice.  However, with rain and mild temperatures this past week, the course changed a lot.  There were icy parts and hard-packed snow trails and some gravel road, but overall, the course was very rideable and a lot faster than only a week earlier. I showed up early to preride the course before the race and found it slippery on some turns, but I was able to get around without any issues.  It was mild (4 or 5C) and overcast and after my preride, I realized I was over-dressed, so I shed a layer. 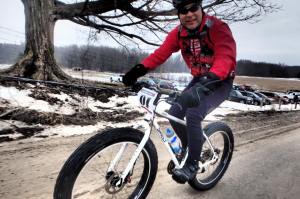 75 riders doesn’t sound like a lot, but with a mass start and narrow tracks down the first trail, the riders got bogged down early on.  I started from near the back of the pack and found myself stuck in traffic within the first few hundred metres.  The first (of six) laps was slow because of traffic, but I wasn’t concerned because I wasn’t there to race; I was there to have fun.  By the second lap, riders had spread out considerably, so I was able to ride my pace for a couple of laps, before the fast riders started to catch me by about my fourth lap (their fifth).  The course was fine until I had to pass someone.  The trail had some good tracks that were packed down with good traction, but to pass, I’d have to ride off the well-worn trail, which was slippery.  I managed to stay on the bike (with a couple of close calls), but I witnessed several people who fell on turns or trying to pass.  Thankfully, the landing was soft in the snow and everyone was able to get right back up and continue.  By the time I finished my sixth and final lap, most riders had finished and were already standing around the fire and sharing stories.

A light rain was falling by the end of the race as riders who had finished kept cheering on those who were still out on the course.  Organizers had a big bonfire going to keep finishers warm (which wasn’t really necessary (but still welcomed), given that it was near 10C and sunny when awards were handed out).

Prizes were awarded for the top 3 men and women, and the sponsors for the event donated a ton of draw prizes (I was lucky enough to come home with a cool Gore cycling vest).  This was a fantastic event that reminded me of the grass-roots of mountain biking.  Fun, a little competitive and social.  Everyone was out to have fun, tell stories, enjoy good company and all for the low price of $45!

I love these local events because it’s great to be around like-minded souls who share a passion for cycling.  Both my bros were there, plus many friends, Hal, Dave, Rob, Bob and Sandra, Scott, Raf, Ken, Steve, Jenn (I’m sure I’ve forgotten some names…).  Plus the crew from King Street Cycles, Andy, Lori, Quinn and Dave.  Thanks for a fantastic event!  See you next year. 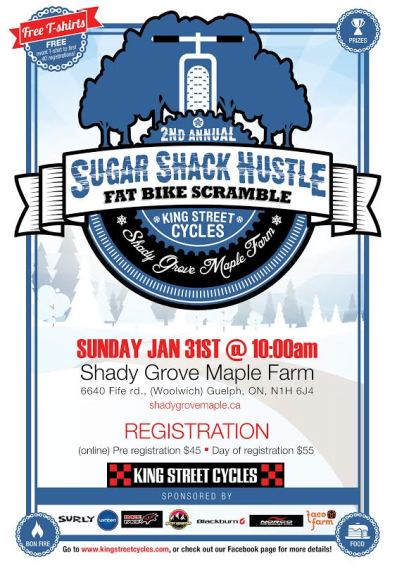