When I write these blog entries, I usually assume that I’m preaching to the choir.  Most readers are likely people who actively ride bicycles.  And that’s great!  When I started this blog, my hope was to encourage more people to cycle but also to get cyclists to cycle more.  Whether or not that’s happening, I can’t say, but I’m always interested in discovering what motivates people to get on a bike.

Ryan Correy’s 2015 book “A Purpose Ridden” is his account of his cycling adventures.  And when I use that term… “cycling adventures”… I mean in the most extreme sense.  A few weeks ago, I completed a four-day bikepacking adventure, covering over 400 km while carrying camping gear, food, clothes etc.  For me, this was a huge accomplishment. There were times when it was exhausting, sometimes painful and I just wanted to quit. For Ryan Correy, this wouldn’t even qualify as a warm-up.

Originally from Alberta, Ryan lived in Burlington, Ontario for a while. And during his time here, he was a Hammer Nutrition sponsor for my cycling club, the Waterloo Cycling Club.  I didn’t meet him, but tales of his accomplishments were common topics in the club’s online forum

A Purpose Ridden starts with Ryan’s account of his ride across Canada when he was just 13 years old with his dad.  After finishing high school, he did a solo bike trip from Alberta to Arizona. He also tells stories of suffering in the Race Across America, the Tour Divide (mountain bike race from Alberta to Mexico), a 25,000 km trip from Alaska to Argentina (apparently this is a “thing”:  http://www.guinnessworldrecords.com/news/2016/4/mexican-breaks-fastest-cycle-journey-of-the-pan-american-highway-record-in-just-1-426543) and a nearly 7-day stationary bike record attempt.  He’s also completed Trans Rockies and numerous 24-hour solo events.

His accounts of these are honest and at times, obsessive, and I was amazed at what he put himself through.  Saddle sores were the least of his issues, as he would often find himself without food and water in the middle of nowhere, or develop painful blisters and who knows what else on his feet from endless hours of cycling and walking his bike on unrideable terrain.

The question of “what motivates people?” continues to intrigue me.  I have times when I’m motivated to go for a bike ride, or plan a cycling trip. I’ve been motivated to train and get faster and accomplish other goals for long rides, multi-day journeys.  Ryan takes it to a different level.  I’m curious about what has motivated him for these incredible journeys.

Ryan has started bikepack.ca as a resource for bikepacking in Canada, with a podcast, videos, and advice.  He also leads an annual bikepacking summit in Canmore.

In July 2017, Ryan announced on his Facebook page that he is battle stage 4 colon cancer.  Follow his battle on his FB page, and if you’re fascinated by truly epic cycling accomplishments, buy his book! I’m not much of a reviewer of books, but I read a lot and this is definitely worth a read! 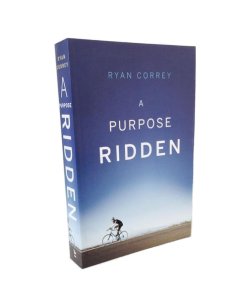