For my 8th “memorable” ride of my 50th year, I entered the Steaming Nostril event in St. Jacobs, Ontario.  The event is run by Cycle Waterloo and 2016 marks the 4th time they’ve organized this event.  The first year was highlighted by slow, slushy rail trail near Elmira, while the second year (which I skipped) was notable for it’s minus 20C temperatures. Last year, I entered the event, which was marked by cold and strong cross winds.  This year, organizers moved the event into April, hoping for better weather.

That didn’t quite turn out as planned: 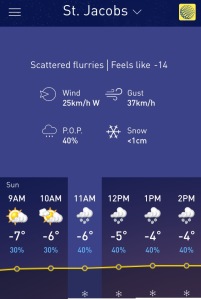 I had my new Cat5gear case packed and ready, and made the short drive to St. Jacobs (about 10 minutes for me) at around 9 am. 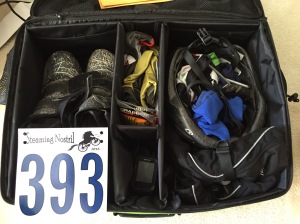 This year, I decided to enter the short (40km) Runny Nose version on my fat bike.  With about 40 people at the start and a wide range of levels, it was hard riding into the head wind because the group split up on the very first gravel road.  These first roads went directly into the wind and with light snow and soft dirt, the fat bike didn’t want to go very fast (ok… maybe it was my legs).  There were seven fat bikers in my category and I rode with two of them until my legs decided to slow down.  A little while later as we headed onto Lawson, two more fat bikers passed me, and I realized that making the podium was a long shot.

Once we turned out of the head wind on Lawson, I got some energy and used the tail wind to my advantage.  The top 3 fat bikers ahead of me, however, were nowhere in sight. Boomer Line was fast with a tail wind but I was on my own with no one to work with.

The big change in the event this year was the addition of a small loop on a local farm.  This loop started innocently enough on a dirt road, but once we turned down hill towards the Conestogo River, the trail got VERY muddy.  I rode most of it on my fat bike, but when I got to the bottom of the hill, my bike had accumulated so much mud that both wheels wouldn’t spin (reminiscent of past P2A adventures).  I had to stop to pull off handfuls of mud just to get the wheels to spin again.  There was some grass that was rideable, and a couple of stream crossings (with foot bridges), and then…. a remarkable hike-a-bike section back up the hill.

This is notable because this hill was steep, muddy and slippery, AND I had to carry/drag my heavy fat bike with me.  Even without a bike, this climb would have been a challenge.  With a 40lb bike (and likely 10 lbs of mud caked on the frame and wheels), it was nearly impossible.  About 1/3 of the way up, I honestly didn’t think I’d be able to make it. I’d walk a few steps, heave the bike up ahead of me, squeeze the brakes so it wouldn’t slide back towards me, then walk a few more.  Rest and repeat.  It took me nearly 10 minutes to scramble my way to the top and when I started to ride again, the wheels on my bike were angry and proceeded to throw large clumps of mud at my face.  But it’s fun, right?

The last trails were merely survival.  The hard riding and hike-a-bike sections had my legs cramping.  I rode through the village of St. Jacobs towards the 69 (I counted out loud) wooden steps to the finish.  This climb/hike-a-bike seemed easy compared to the muddy climb, and you might even see a smile on my face here:

Once at the top of the stairs it was a short ride to the finish.  The Runny Nose was 42 km (according to my Garmin).  It took me about 2 hours and 17 minutes.  The longer Steaming Nostril was about 65 km.  The leaders finished in just over 2 hours.  Results are at www.racetiming.ca.

Thanks to Cycle Waterloo for organizing an event that is becoming an Ontario Spring Classic.  I ride these gravel roads in the Region of Waterloo a lot, and it’s nice to see some of them featured in this fantastic event.