Ride #1 of 50 memorable rides in 2016 was at the Milton Velodrome this week.The company I work for, Matrix Solutions, had a team-building event where about 10 of us got some training on track bikes followed by an hour or so to ride on the track in Milton.  This was my first time riding on an indoor cycling track and I wasn’t sure what to expect.  I’d been to this velodrome last summer to see some events of the 2015 Pan Am Games (I guest-blogged on Michelle the Runner’s blog about the event here.)

After getting fitted for our rental track bikes, we head up the ramp to the track where our instructors Scott and Josee taught us how to clip in/out, stop and start on the fixed-gear bikes.  I had wrongfully assumed that this would be easy, given my years of riding clip-in pedals on mountain bike and road bikes.  However, on fixed-gear bikes, the pedals always move when the bike is moving, so clipping in or out isn’t quite the same.  I did manage to figure it out without any incidents, but a few times, I had to drag my foot a bit when I was stopping.

Once we learned the basics, we headed to the track and did some slow laps, gradually increasing our speed and moving up the banked turns with more confidence.  Our group had a wide range of cycling experience, from Elite road racers to some who haven’t been on a bike in years. All but one of us had never been on the track before. 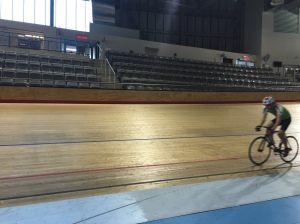 Once we were out riding on our own, everyone found the pace that they were comfortable at (new cycling term: “Stick!”).  I found that once I got into a rhythm, I just wanted to go faster (until the engine got tired).  I found myself moving higher and higher on the banked turns.  Our instructors told us we could go as high as we felt comfortable, so I kept inching my way up until I nearly reached the railing.  I was amazed at the extra effort needed to climb that high, but was equally amazed at the burst of speed I got when I came down the other side.

One of the highlights was the one-lap (250 m) time trial from a standing start. Each of us took a turn to race one lap as fast as we could.  I did my lap in a little over 23 seconds, or an average of about 38 km/h (My Garmin GPS didn’t work indoors, so I don’t know the maximum speed, but let’s just assume it was about 80…)

I wasn’t sure how much I’d enjoy riding around in circles indoors, but by the end, I was thrilled to have this experience.  I may, given the opportunity, try it again!