Four years ago, Heather Caron’s husband Barrie Conrod died after being struck by an SUV while the two of them were on a bike ride on a road that I’ve ridden on many times. Through this tragedy, Heather has found the strength to promote cycling awareness and safety.  One of the main ways she’s been doing this has been by supporting an annual ride in Kitchener-Waterloo. Sunday May 29, 2016 was the fourth annual Together We Travel Cycle for Angels ride.

My family and I rode from our house in Waterloo along the network of bike trails (Laurel trail, Spur Line trail, Iron Horse trail) and were able to get to Victoria Park almost exclusively on trails. Sign in for the event was fast and simple and after some introductions and a very touching speech by Heather, the very large group (100-200?) followed the police escorts (on bicycles of course!) along a 3 km route around downtown Kitchener.  The group, noticeably dressed in white t-shirts, was led from City Hall along downtown roads, while pedestrians and motorists stopped to watch in awe at our huge group.

Many thanks to the generous support of the organizers, volunteers and sponsors. It’s great to be a part of this kind of event.  We can all play a role in the safety of cyclists, and we’re very lucky to have an engaged, educated group of cyclists in the Region (including several local politicians who came out today). 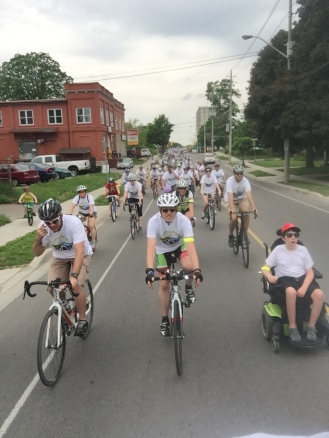 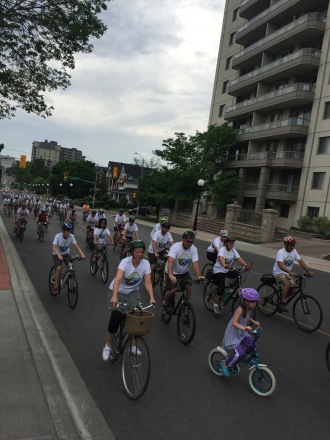