A lot of the online resources for bikepacking describe routes that take many long days to complete.  Locally, July 14, 2019 marked the inaugural Grand Depart for the BT700 – a 700 km loop around south-western Ontario!  Not all bikepacking trips, however, have to been multi-day epic adventures.  Last weekend, I did an overnight trip less than a couple of hours from KW.

My friend Taryn and I decided to pack our bike bags and ride to the Elora Gorge for an overnight bikepacking trip.  For me, it was a good opportunity to test my bags and gear, which I hadn’t used since my four-day COLT trip in the fall of 2017.  Since that time, I’ve made some adjustments to my bikepacking bike and set-up..

Elora is a small town that lies on the Grand River, about 30 km north of Kitchener-Waterloo.  It makes for an ideal rest-stop for cyclists from Kitchener, Waterloo, Cambridge and Guelph.  Just outside the village, there’s the Elora Gorge Conservation Area, which has over 300 campsites.  This campground features one of southwestern Ontario’s hidden gems: The Elora Gorge, which is a deep gorge, with vertical cliffs over 20 metres in height.

Since the ride was only about 30 km (and because we weren’t organized enough to leave any earlier), we left K-W around 7 pm on Friday night.  There are many routes to get to Elora from K-W, depending on whether you want to take paved or dirt roads.  We plotted a route that took as many dirt and gravel roads as possible.

The map above shows our route from Waterloo to the campground in Elora.  Included on this route was the Cottontail Road Trail.  This trail connects the Kissing Bridge/Guelph-to-Goderich (G2G) trail to Elora.  It includes some back-country gravel and paved roads and leads directly to the park entrance a the Elora Gorge Conservation Area (see below

We arrived just before sunset and since we’d left so late, I’d already had dinner, so we didn’t even need to cook.  It was a hot and humid day and we set up our tents as darkness fell. There were showers in the campground (bikepacker tip: Bring quarters for the shower!).

After a light rain overnight, the next morning was already starting to be another hot one as we took down our tents and packed up.  We rolled into the village of Elora for breakfast (at the Cafe Creperie!)

For the route home, we wanted take a different route back to K-W and we wanted to include gravel roads.  We ended up with this route: 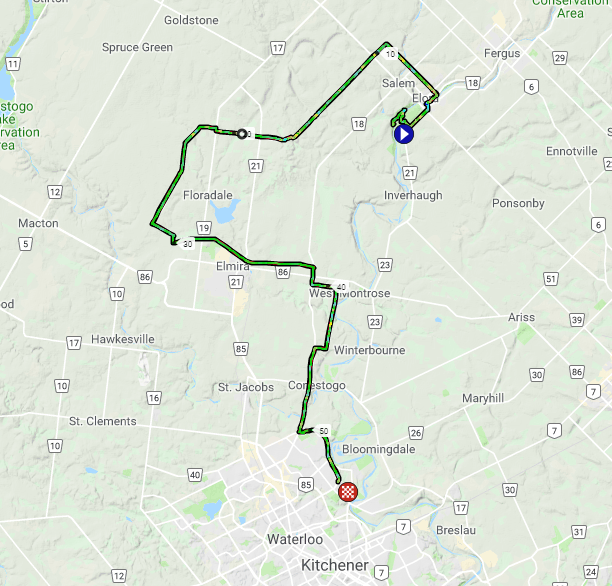 Although some roads were paved, we did cover a lot of gravel:

With a 55 km route home, I was back before noon.  The overnight bikepacking trip was short but enjoyable.  Sometimes we don’t need to seek multi-day routes; bikepacking can be right in our own backyard!

2 thoughts on “Bikepacking in the Kitchener-Waterloo area”

A video of a VR display at @rbgcanada !!
Autumn is for cycling.
More VR @rbgcanada
Augmented reality RBG!