I know the year’s not over yet, but 2017 has been a good year for me.  I started slowly, since I was recovering from a concussion, but my mileage (kilometerage?) slowly increased as the year went on.  I thought I’d post some of my favourite photos from the year:

In January, I joined Team Colin at Joyride!  Colin is a regular there and he and his kids showed me all the stunts and loops for ride #42 of my “50 memorable rides in my 50th year” quest

The next day, I rode downtown past Ontario Place.  It’s been closed for a few years now, but I hear it’s re-opening…?  I have a lot of memories of that place from my childhood: 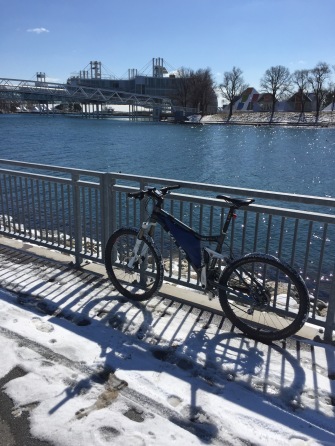 In early spring, I entered the local bike race “The Steaming Nostril”, which is run by a couple of my friends, Malcolm and Blake at Cycle Waterloo.  Because I hadn’t been riding much, I entered the shorter (40 km) version called “The Runny Nose”, and rode my fat bike!  Much to my surprise, I finished third in the short-course fat bike category!

Walking my heavy fat bike up “The Longest Kilometre” was no easy feat, but photographer Lauren Daniells took a great photo of me sticking my tongue out.  In that moment, I was trying to bribe spectators to carry my bike up that hill for me.  I was offering $20 but there were no takers.

Later in the spring, I went to Killbear for the long weekend in May.  The trip included a bike ride from the park to a new brewery called Norse.

For summer vacation, we travelled to BC and on our final day of the trip, we rented bikes and rode around Stanley Park in Vancouver:

In July, I embarked on my first-ever bikepacking trip with my bro Greg.  We rode from Ancaster to Turkey Point Provincial Park where we camped for the night before riding back to Ancaster the following day:

On my 51st birthday in August, I mapped and rode the route shown below (and re-coined the term “bicycalligraphy“, which has yet to catch on…):

And a day later, I entered the Eager Beaver gravel bike race.  I rode the short (50 km) distance on my fat bike and I won the category (out of 4 competitors!).  Organizers Substance Projects put on fantastic events, and rather than a medal, I won a huge beer stein and a six-pack of Amsterdam beer!

In September, I joined my bro Greg and two friends, Hal and Matt on a four-day bike-packing trip of the Central Ontario Loop Trail (COLT). You can read more about it here, but I’ve included a few photos:

I’ll do a summary post of my 2017 numbers once the year expires in a few weeks!

One thought on “2017 Year in Cycling Photos”