Avid cyclists (at least most of the cyclist I know) tend to be weather junkies.  Rides are often planned around weather.  Particularly in winter, when the wind can make it feel a lot colder when you ride into it.

When I started riding out on the roads (before I went on group rides), I would leave the city and head east (since I live on the east side of town).  Without realizing it, I usually had the wind at my back and I felt fast and strong at the beginning of a ride.  Then I’d inevitably turn around and head back into the wind.  This meant working a lot harder while going a lot slower.  I’ve since learned to check the weather before planning my rides.  I try to head out into the wind so I can enjoy a tail wind on the way home.

My obsession with weather led me to a Facebook page called “Ontario Storm Tracker” that shows warnings of upcoming weather that is potentially hazardous.  Their maps show areas of projected storms, and in winter, most storms start on the Great Lakes, which can lead to snow squalls (large amounts of snow in a short period of time).  This is why places like Barrie and Kincardine can get huge amounts of snow.

After looking at these maps for a while now, I’ve come to discover that Kitchener-Waterloo is in a dead zone.  We’re surrounded by land.  If you were to find a location in southwestern Ontario that was equidistant between Lakes Huron, Ontario and Erie, I’m sure you’d end up in K-W.

Check out the maps below (From Ontario Storm Tracker) and you’ll see that for these “major weather events”, K-W seems on its own, isolated from severe winter weather…. in a weather “dead zone”!

One final thing… if you read my previous blog post about not believing what you read on the internet, you should immediately become skeptical about this.  I’ll admit to choosing maps (below) that fit this narrative; you’ll have to draw your own conclusions! 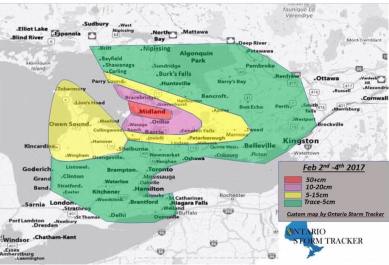 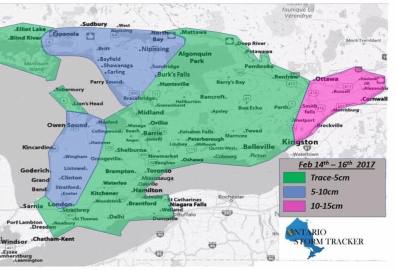